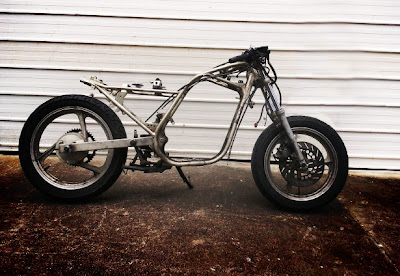 Today was a good day.  Started off with an early ride on the Legbreaker around the traps, whilst smoking out the neighbourhood with the smell of two stroke, I bumped into an elderly couple.  The wife was riding a beautiful 60's Triumph Scrambler restored immaculately and the elderly chap was riding a 70's Moto Morini.

Got back to work on The Experiment and to tick off a few items in the list.


One thing we did notice was that the SRX is living up to it's project name The Experiment.  There are a few quirky decisions that the designers have made with this bike and we believe this model could have been an experiment itself as part of Yamahas R and D division.

However she is now bare boned ready for sandblasting and powder coating.

indigoblastingandpainting said…
The information you have published here is really awesome, as it contains some great knowledge which is very essential for me. Thanks for posting it. sandblasting Ohio
January 25, 2021 at 3:29 PM