Showing posts from August, 2011
Show all 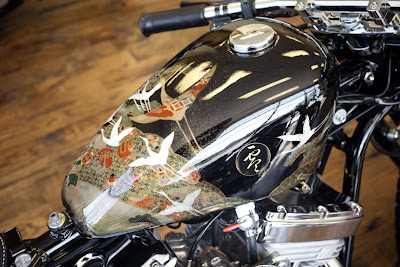 Found this incredible paint job on a 96 Evo from the guys at  Zero Engineering . "This painting process involves laquering silk fabirc onto the tank and repeated sanding and laquering to a smooth finish. This tank also has a spash of gold flake to pull it all together. Amazing level of detail and most definitely one of a kind." It sure is! [All photos from the Zero Engineering website]
1 comment
Read more 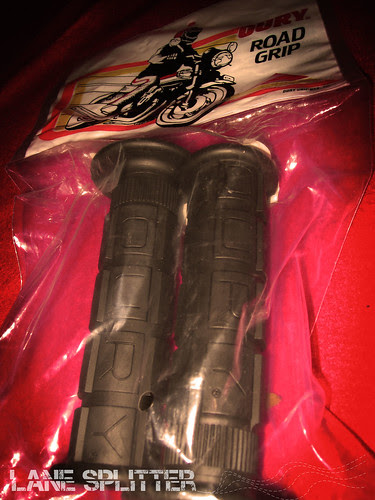 These arrived in the mail today after waiting a while for the supplier to get them back in stock.  I've used these grips on various push bikes over the last 10 years and when I found out that they made versions for the motos I had to get myself a set. They are probably the most comfortable grips that I've ever used and for those with slightly bigger claws these are great. This set will go onto the Legbreaker and will match perfectly with the tyres.
Post a Comment
Read more

Just Finished another one

Apparently the this formula was what you'd need to use to derive light trajectory.  Well today I should be able to solve my current light trajectory hypothosis for the Legbreaker, with the arrival of a couple of 6V bulbs The standard h4 12V 60/55W bulb that came with the headlight has now been replaced with the 6V 35/30W version.  Even though it'll still need 2 extra amps to light our way the installation of a 6V LED tail and indicators should compensate for the hungry H4
Post a Comment
Read more 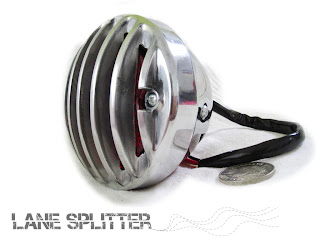 These hand polished aluminium finned taillights would make the ideal finish to any custom build.  Would really suit a bobber or chopper but would look equally as appealing on a tracker or cafe. These can be mounted via two mounting holes on the rear of the light.  A couple of the options could be to mount these next to the rear axle onto a number plate bracket or you could mount it onto the back of a rear fender, as it comes with an integrated number plate light. Specifications for the light: About 10cm in diameter and 8cm in length 12V 23/8W Bulb Polished Aluminium Cover with Chrome body Easy to plug n play with Black (ground) Tail (yellow) Red(brake) wires. If you have any questions let me know
Post a Comment
Read more 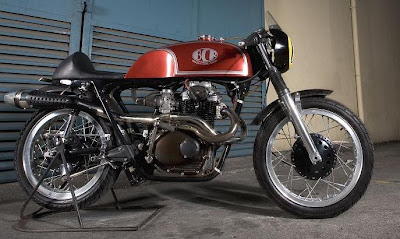 AKA "The Little One" This nicely done cafe started out as a 1969 Honda CB350 and was tastefully brought back to life by the guys at Benjie's Cafe Racers .  Along with building beautiful cafe racers, BCR is also well known for their custom one off tanks and seats primarily made of fibreglass.  For this build they originally wanted to quickly put together a cafe by painting a checkered stripe down the tank, adding some clip-ons and finding a new rear tail.  But they wanted to create something a little different and I'm glad they did. Making the tank the centrepiece of the bike they based their design on the Norton's Manx and Matchless's G50.  They fabricated a 2 into 1 trap disc silencer out of stainless, a fibreglass tank and seat, along with a more aerodynamic front numberplate which also acts as a cowl.  More subtle details included the Stainless bars, rear-sets and top triple modified to house the speedo. The one thing I like about their bikes are t
Post a Comment
Read more 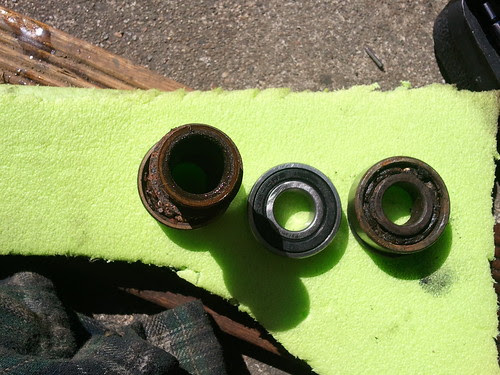 Finally the wheel bearings for the Legbreaker arrived and I spent some time this weekend replacing them. It seemed as though these were the originals from the 70s and were in dire need of replacing. Picked these up from a company called Pyramid Parts, a New Zealand based company. Choice bearings bros.
1 comment
Read more

It's not about the size of your bike.... 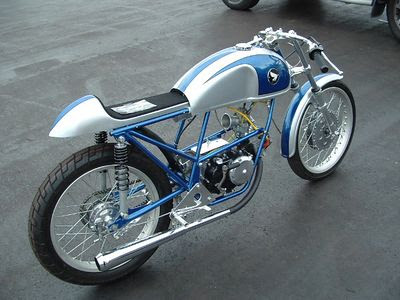 It's how you ride it? Since we've been working on the 125 Legbreaker I've really come to love the smaller bikes.  Not only are they light and easy to work on (ie you can lift an engine out without a hernia) they're great fun to ride. I remember when I first went to a track, one of the instructors told us when cornering if you decreased the speed you would increase the fun.  I thought that was a load of rubbish at the time as I took off like a bull at a gate, scoffing inside my helmet as I prepared to enter into the first corner. However not only was I running wide but I also nearly soiled myself a number of times.  I started to slow down a bit around the corners and I was able to concentrate more on my positioning and line through the bend and as a result began to ride a lot smoother. Great looking Honda 125 would be a blast to ride through the twisties It was after that experience that I realised that I didn't need to go 1000mph especially on open r
3 comments
Read more 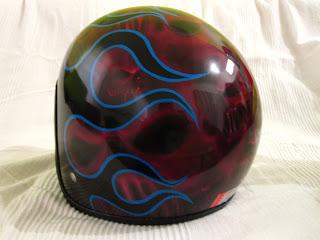 Just finished painting this helmet.  Tried out some new AutoAir Candy Red, and my second attempt at pinstriping flames with one-shot blue.  I always get nervous before I start pinstriping, I get the bouts of Elvis Hand.
Post a Comment
Read more 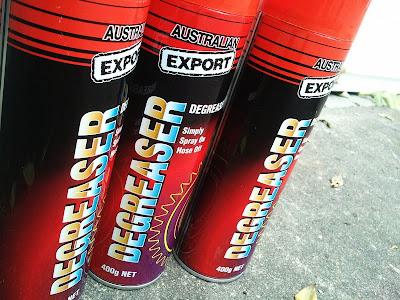 Who says the dog is man's best friend. Picked up 3 for $5.00 at Supercheap.  Can never have too much degreaser great for removing all those stubborn stains, and the gel out of your hair after a rockabilly festival. Specs on the tin: Powerful all-purpose degreaser Use on car, truck or motorcycle engines, mowers, outboard motors, concrete floors & more Simply spray on & hose off Supporting the Australian economy?
1 comment
Read more 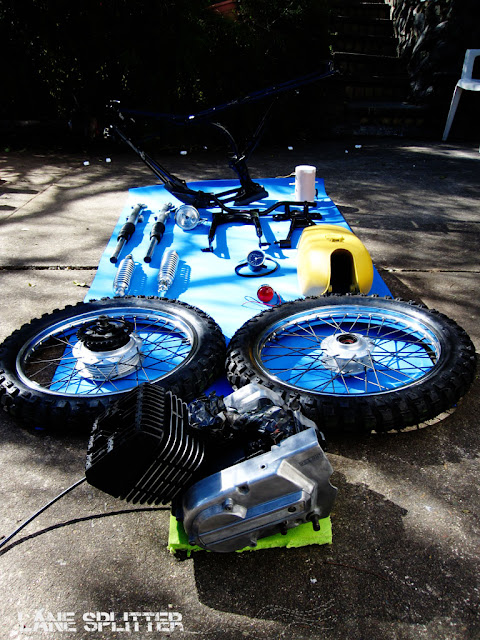 Finally have all the parts painted and ready to be put back together.  Was a nice day so was good to hang out in the sun, although I'm not sure how my office tan feels about that. Still waiting on wheel bearings... bloody Australia Post.
2 comments
Read more 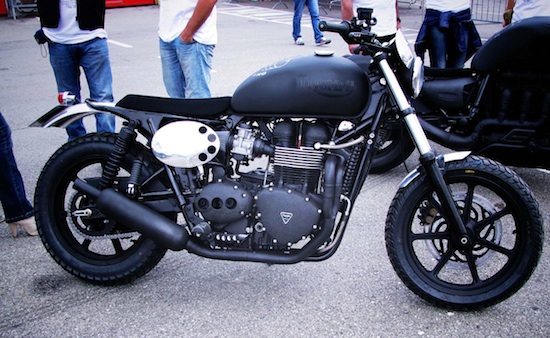 I would probably describe this bike as a Strambler !  def: Cross between a Street Tracker and Scrambler, the seat and rear has somewhat of a Scrambler feel with the side plates, tyres and bars giving it more of a Tracker feel.  Either way it doesn't really matter, but it does look great. Found this Triumph over on Ottonero  and was initially drawn to the matt black tank with the gloss triumph logo, along with the kind of suede leather seat.   Also like the mag wheels and the chromed side covers and the 2 into 1 exhaust setup. Hmmm wonder if Strambler will catch on? Probably not.. It sounds more like a way to cook your eggs.
Post a Comment
Read more