It's all original with a little over 15,000kms on the clock.  Even comes with the original side covers and reflectors on the side of the frame.

Why the name "Leg Breaker"?  Apparently the owner before this one, his son had a bit of a Lara Bingle and broke his leg in the process.  After the incident the bike sat in the shed never to be ridden again... until now.

Don't worry I've hired a priestess, to warn away any bad bike karma so there will no chance of this happening again.  She splashed holy water over it and said a few words to warn away any bad bike karma.  Well it wasn't exactly holy water, but tap and the words were more like "wow it smells like a lawn mower".  Anyway I'm sure it's done the trick.

After we got it home, we kicked it over first go and it idled beautifully and with the smell of two stroke in the air we took it for a spin up the street.  She ran out of go while trying to open the throttle so I pulled the carb apart and cleaned it out.  The pilot and main were blocked and clearing them fixed the issue.

So without further ado we present the "LEG BREAKER" 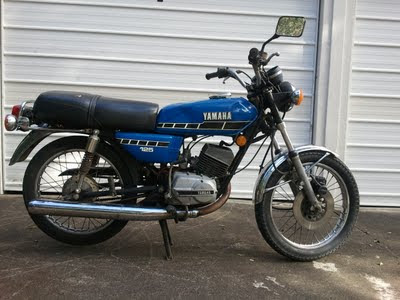